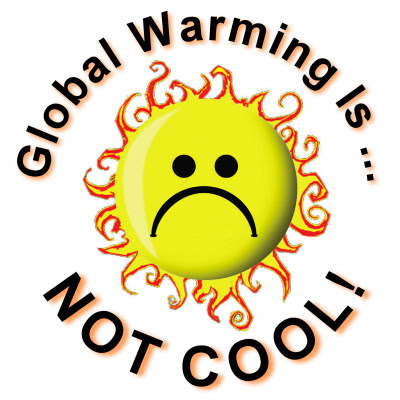 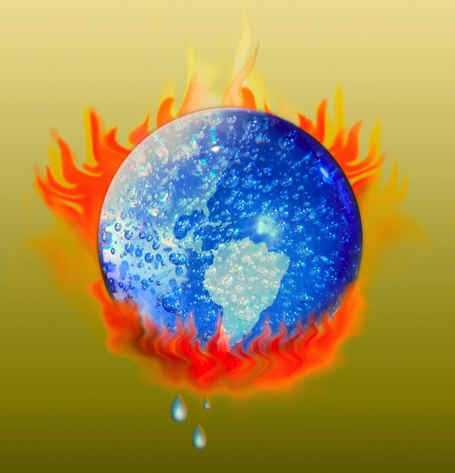 Global warming is the increase in the average temperature of Earth's near-surface air and oceans since the mid-20th century and its projected continuation. Global surface temperature increased 0.74 ± 0.18 °C (1.33 ± 0.32 °F) between the start and the end of the 20th century.
Global warming refers to an increase in the Earth’s average surface air temperature. Global warming and cooling in themselves are not necessarily bad, since the Earth has gone through cycles of temperature change many times in its 4.5 billion years. However, as used today, global warming usually means a fast, unnatural increase that is enough to cause the expected climate conditions to change rapidly and often cataclysmically. 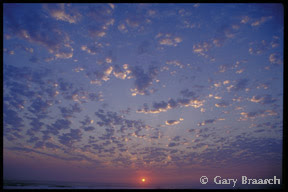 Our planet is warmed by radiant energy from the sun that reaches the surface through the atmosphere. As the surface warms, heat energy reﬂects back toward space; meanwhile, gases in the atmosphere absorb some of this energy and reradiate it near the surface. This is often called the greenhouse effect, named for the way heat increases inside a glass enclosure. In the greenhouse effect around Earth, the atmosphere can be visualized as a blanket that is made thicker by the action of a small amount of water vapor, carbon dioxide, methane, ozone, nitrous oxide, other gases, and soot; it thus holds in more heat, forcing air temperature higher. The scientiﬁc term for this action is, in fact, “forcing.”
On an average day, this effect is caused by water vapor and clouds (75 percent) and carbon dioxide (20 percent), with the rest fthe heating caused by other gases. Relatively small additions of carbon dioxide and methane force more heat, and that heat allows the air to hold more water vapor, creating a feedback loop that magniﬁes the effect. Although water vapor is naturally prevalent in the atmosphere, it does not trap as much heat per molecule as carbon dioxide and methane. Also, water vapor molecules cycle through the atmosphere in only a few days, a brief period compared to the residence time of CO2,which persists for many decades and creates some warming even after as long as three hundred years. Dust and aerosol chemicals in the air cause some cooling (negative forcing); they are also very short lived. Even though the gases are measured only in parts per million (ppm) or billion (ppb), they have been powerfully, and naturally, inﬂuencing the Earth’s temperature for millions of years. Without them, instead of an average air temperature of about 58°F (14.5°C), the Earth would be below the freezing point. Life as we know it now would be impossible.
Earth’s temperature is also subject to natural forcing cycles from solar radiation and the movement of the planet around the sun. Scientists think these cycles, which have left a visible signature extending back millions of years, arewhat led to past iceages and the warming that ended them. Currently, we are in a period between major iceages. The last great glaciation, when temperatures were about 10°to 12°F (6°to7°C) cooler than today, began fading away about 18,000 yearsago. The initial transition out of the ice age was unstable,with many rapid temperature shifts. As temperatures warmed, climate was affected.

Description of global warming prevention and what can be done by the individual in and around their home to help.

The terms "global warming" and "greenhouse effect" have become common topics of conversation worldwide. Synonymous with climate change and pollution, this issue is the contributor for mass speculation. Every individual has the ability to help ensure the health of our environment and awareness and education is the first step. Contrary to popular belief, it is not the sole fault of large corporations that our environment is in crisis. It is us, the individual consumer. Without our need and demand, these companies would not be producing ecologically harmful products. Information is our best defense and making more environmentally sound decisions our best offense. There are many substitutes for products and merchandise that would be more environmentally safe, it is just a matter of knowing what they are.
Chemicals-
Avoid chlorine at all cost! Use of any chlorine compounds is very harmful to the environment including bubbles in plastic foam, spray paint, fire extinguishers, bleach and a multitude of discarded household and industrial chemicals. Phosphates found in many laundry detergents and soaps contributes to water pollution and should be avoided. Aresols such as air fresheners and hair sprays can contain butane/pentane which contributes to air pollution and should be avoided. What out for products that are "bleached" white (ie.baby wipes, writing paper) and look for companies that offer the same products which are whitened with peroxide and chlorine dioxide which is less harmful to the environment.
According to Seventh Generation, "boric acid and pepper sprinkled in places like backs of cupboards" are effective methods of pest control as a substitute for harmful insecticides and poisons. As well "planting mint around the house" will help discourage pests from entering your home. Cedar chips are effective for moth control, and even feeding your dog brewers yeast will help control fleas.
Appliances-
It is very important to keep up on the maintenance of your refrigerator and air conditioners as they can leak very toxic and harmful chemicals. Furnace maintenance will help to reduce the amount of heat you need, thus reducing fossil fuel production.
Waste and Recycling-
It is very beneficial to use recycled paper or to use products that are manufactured from ecologically managed forests. According to Seventh Generation "if every household in the US replaced just one roll of 1000 sheets of toilet paper with recycled toilet paper, could save 373,000 trees, 1.48 million cubic feet of landfill space (equal to over 1682 full garbage trucks), 155 million gallons of water (a years supply for 4465 families of four) and avoid 62,000 pounds of pollution". It has been said that it takes roughly 19 trees to make one ton of paper and that the usage of one ton of recycled paper will save approximately 17 trees. Of course there is the importance of recycling your trash, separating the cans, glasses and papers.
Home maintenance-
Due to the harmful process of making fossil fuels, we should do what we can to reduce their production. Weatherstripping, insulation and proper ventilation will go along way to reducing the amount of heat your home needs. Use of cold water instead of hot will reduce the amount of energy needed, as well only running dishwashers and washing machines when full.
Composting will help you to dispose of biodegradable waste in your home and planting trees on your property will enhance the appearance of your home. As well as being visually appealing, trees help to control carbon dioxides in the air, and helps to dispose of toxins in the soil. Thus preventing them from being released into the atmosphere.
Arguments are being debated over how extensive this problem is and according to Albert K Bates who wrote "Climate in Crisis", "the current warming is happening much faster than it has ever happened looking back millions of years". He also continues on to say, "it now seems evident that this most recent warming is caused by human activity, rather than by geological or astronomical processes" If it is by human practices that we have caused this issue, then it should be by human intervention that it is impeded or reversed.
We can STOP global warming and end climate change now and still keep our high standard of living. So Let us all come together to save our Mother Nature, earth and future of our next generations.
Posted by SUJITH KUMAR at 1/03/2012 06:42:00 PM