Naturally Frozen wonders of the world 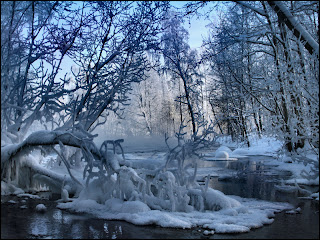 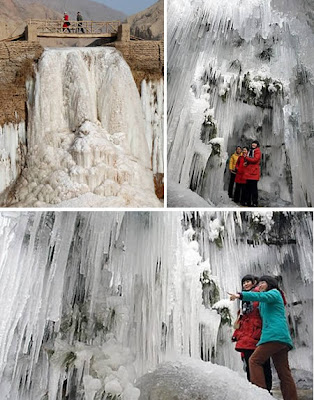 Frozen Waterfalls
The growth of a frozen waterfall can proceed only gradually, for progressive freezing of the flowing water. There are thousands of frozen falls around the world. The one located at Beijing's Myun County attracts tourists from all over the country as well as internationally. A beautiful display of nature's art at work. 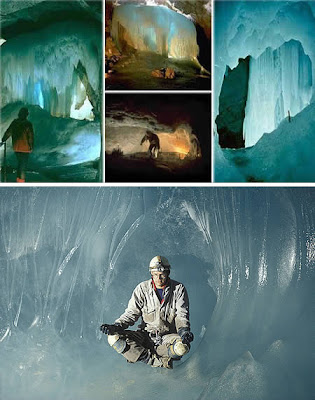 Ice Caves
Ice cave are a type of natural cave that contains significant amounts of ice. At least a portion of the cave must have a temperature below 0 °C (32 °F) all year round, and water must have traveled into the cave's cold zone. There are many ice caves throughout the world, but the Eisriesenwelt Ice Caves in Austria are some of the largest known to man. 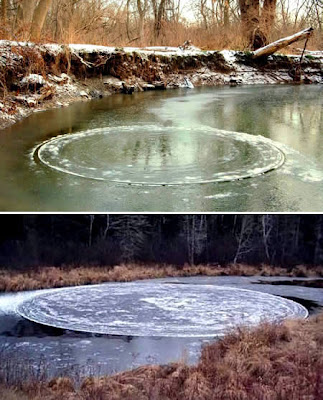 Ice Circles
A rare phenomenon usually only seen in extremely cold countries, scientists generally accept that Ice Circles are formed when surface ice gathers in the center of a body of water rather than the edges. A slow moving river current can create a slow turning eddy, which rotates, forming an ice disc. Very slowly the edges are ground down until a gap is formed between the eddy and the surrounding ice. These ice circles have been seen with diameters of over 500 feet and can also at times be found in clusters and groups atdifferent sizes. (Photo by Brook Tyler) 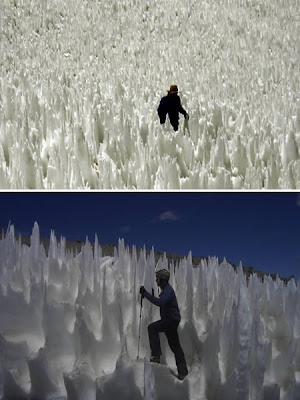 Ice Spikes
These amazing ice spikes, generally known as penitentes due to their resemblance to processions of white-hooded monks, can be found on mountain glaciers and vary in size. As this accelerates, deep troughs are formed, leaving peaks of ice standing between them. Chile is home to the rugged mountain terrain of the Andes and the severe weather extremes at different altitudes make for some stunning ice formations, like daggers looking ice field. 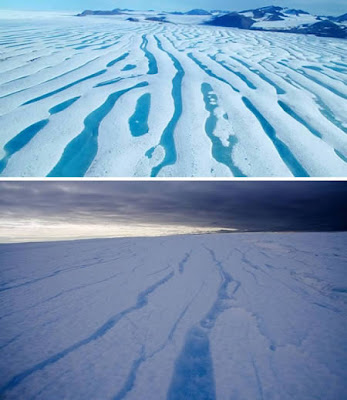 Ice Shelves
Ice takes on all sorts of interesting asymmetrical and geometric shapes, from the icy platelets above to the incredible parallel ice shelves of the Arctic. Ellesmere Island is famous for its ice shelves, but unfortunately they are diminishing rapidly in the face of global warming. Climate change caused alarming losses in summer of 2008, and scientists are concerned that this special ecosystem may soon be lost forever. 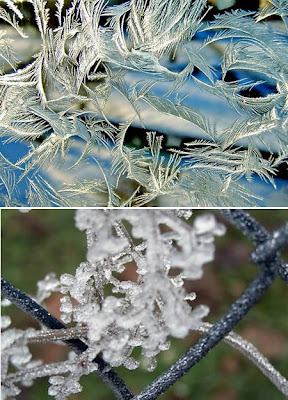 Ice Flowers
Ice flowers are formed on new layers of sea ice, from saturated water vapors that come up from under the ice through cracks. In contact with the cold air, the vapors start to freeze and the salt on the surface of the ice begins to crystallize and serves as a nucleus for the frozen vaporized water. Thus, molecule by molecule the ice flowers begin to take shape. They have recently been recognized as the dominant source of sea salt aerosol in Antarctica and scientist suspect they may be the main cause of tropospheric ozone depletion during the polar sunrise. One of the most beautiful frozen wonders on Earth, ice flowers are still a mystery to many people. 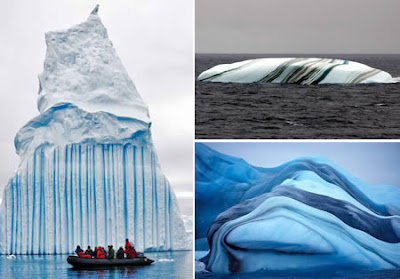 Striped Icebergs
Icebergs in the Antarctic area sometimes have stripes, formed by layers of snow that react to different conditions. Blue stripes are often created when a crevice in the ice sheet fills up with meltwater and freezes so quickly that no bubbles form. When an iceberg falls into the sea, a layer of salty seawater can freeze to the underside. If this is rich in algae, it can form a green stripe. Brown, black and yellow lines are caused by sediment, picked up when the ice sheet grinds downhill towards the sea.

Glaciers
Glaciers are simply accumulated snow, packed densely into ice over thousands, even millions, of years. Glaciers serve an important function as ecosystem regulators and water suppliers (they are the largest single source of fresh water), and the heating of the planet has led to major glacier shrinkage around the world in the last decade. Perito Moreno in Argentina, known as one of the few still advancing glaciers on Earth, is a great example of that simple yet stunning ice formation.

Snow Flakes
Snow crystals form when tiny supercooled cloud droplets freeze. These droplets are able to remain liquid at temperatures lower than -18 °C (0r °F), because to freeze, a few molecules in the droplet need to get together by chance to form an arrangement similar to that in an ice lattice; then the droplet freezes around this "nucleus."

Frozen Tidal Wave?
Despite it looks, this is not really a tidal wave but ice created from glacial movements forming tidal wave looks. Pretty cool.
Have you got your snowmobile yet? No, no… you don’t have to buy one… You can just…
….leave the doors of your car open… 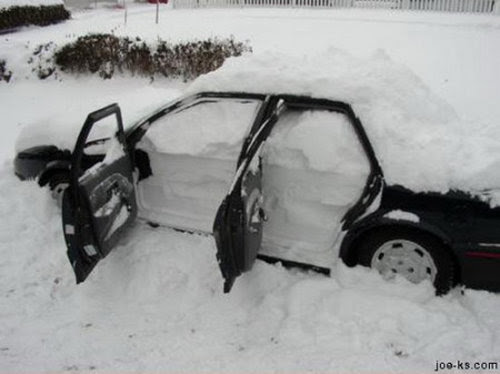 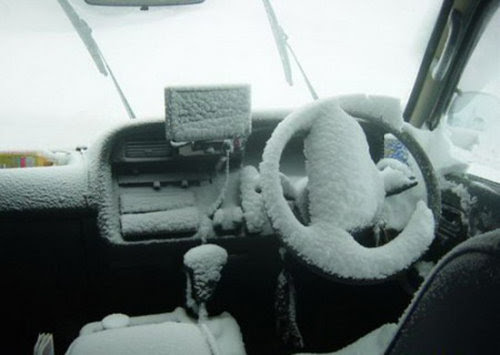 …forget it for weeks in front of the house… …wash it if needed… 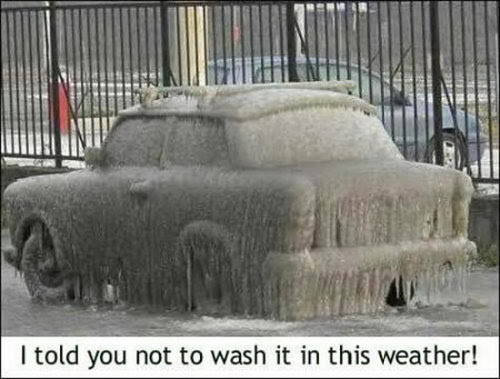 …no matter the model… …and try to enjoy some “winter sports” on top of it… ’cause you know… snow is funny! 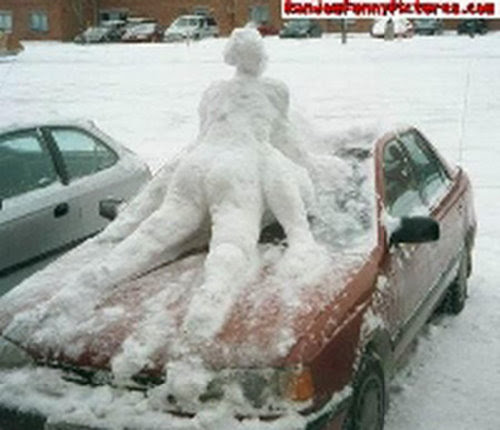 And do not worry. Nothing bad will happen. Just imagine in what conditions your car was shipped before you bought it… 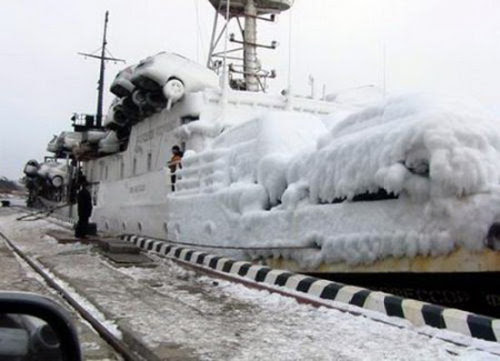