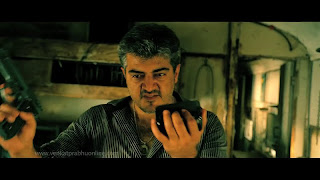 Ajith's 50th film, Mankatha has been released in Telugu as Gambler and the film is doing whopping business. Tickets are selling like hot cakes and the makers could not be happier. Ajith's turn as the bad guy has come in for a lot of praise and admiration and he has won himself even more fans.
Mankatha continues the winning trend of Tamil films clicking in Andhra Pradesh. Earlier  this year Ko released as Rangam did fantastic business and Karthi's Naan Mahan Alla released as Naa Peru Siva also did an exceptional job at the box office. There is a huge market for Tamil films in AP and this is great news for our Tamil film industry.